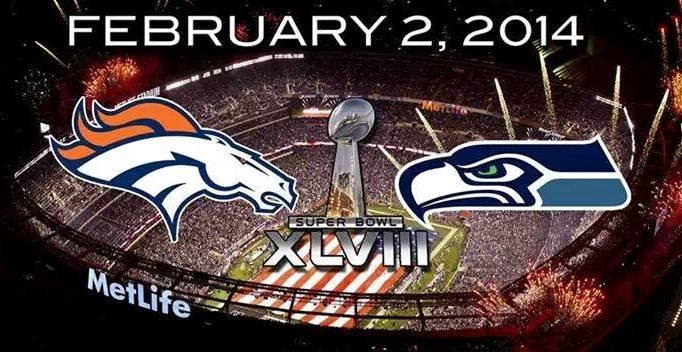 The Chief is here, and so is game day!!! Football fans have waited months for today and it has finally arrived. The talking and anticipation is over, now it’s time to get out there and kick some ass. However, before this grand event takes place, I’m going to break down each side of the ball for each team and give you a prediction on the outcome. Let’s get fucking started!!!

When Denver has the ball :

When the Broncos have the ball tonight on offense it’s pretty simple, watch out!! This season they had the most explosive offense the NFL has ever seen. They are led by now 5 time MVP Peyton Manning who has a wide variety of weapons to choose from. Pick your poison, Wes Welker, Demariyus Thomas, Julius Thomas, Eric Decker. Each guy has their own skillset and is just downright nasty, and it helps make a great like Peyton Manning’s job that much easier. OH yea, and that’s just the passing game. Knowshown Moreno went over 1,000 yards rushing this year and had the best of his career. Couple with rookie Monte Ball who has really come on towards the end of the season, this just adds another tough dimension to and already near unstoppable offense. Simply put, Seattle’s entire defense has their hands full tonight.

When the Broncos are on defense :

This is the side of the ball that is a little more tricky for the Broncos. They have a stout run defense which ranks 7th in the NFL, but on the other side they are ranked 27th against the pass. You don’t always have to believe the statistics. but I’m just laying them out there for arguments sake. They have some talent, and with veterans like Champ Bailey and Shaun Phillips, who are hungry for the chance to win their first ring, it’s hard to believe that this unit won’t make a few plays before the night is over. The broncos D also ranked 3 in forced fumbles and that definitely could play a factor tonight, as well as the fact that the Seahawks don’t have an overwhelming offense. At least not in the stats department. The defense has been overshadowed by Seattle’s for 2 weeks, maybe that will change tonight?

When Seattle has the ball :

I’m going to keep this pretty simple. Marshawn Lynch needs a big game. There is no better back in the NFL at picking up yards after contact than this man. He is as powerful of a runner as there is in this sport, he earns every inch. Lynch will be the player the Broncos will be focused on stopping, which leads me to my next statement. Russell Wilson will also have to make some plays and help light up the scoreboard. Wilson is not going to put up crazy numbers and all that shit the average fantasy yahoo dumbass fan loves, but he is a smart QB who can make plays with his feet, and has a cannon of an arm to throw it while he’s running on those feet. If he is able to get loose a few times tonight and buy himself some time, I would look out if I was Denver’s defense because you may be in a lot of trouble. This is the true X factor of tonight’s game.

When The Seahawks are on defense :

We know all about em. Ranked number 1 overall in the league, the talent is almost endless, and they have a mean streak about them that is necessary if you want to be regarded as the best Defense in the NFL. Thanks to Richard Sherman and his mouth, we know that they possess the best secondary in the game. But it won’t be that unit that makes or breaks this defense tonight. It will be their front 7, which is versatile and deep, and needs to provide some kind of pressure in order for the Legion of Boom to wreck havoc tonight. If there is no pressure on Manning, it will that much easier for him to carve that secondary up. If he receives a little bit of pressure, the guy simply isn’t the same and sometimes can’t find his groove. This is going to be one great match when those two units are on the field. I’m sue both sides will get their punches in before this game is all said and done.

This game is going to be back and forth. I’ve heard many people fpr almost 2 weeks tell me that the Broncos will run away with this game. But, here’s the great thing, I don’t really give two shits what most people have to say, so I’m going with Seattle. I will predict a game with some points, and the outcome will be 28-24 Seahawks. IF I’m wrong so be it, but I’ll have some balls, which few possess nowadays and go against what everyone else seems to think. All I know is I will be glued to the TV tonight, and I hope other football fans will be, because I believe you will not be disappointed.

Co-Founder and Lead writer / blogger for Attitude Sports. Also know as "The Chief" for Attitude Sports. Copyright Disclaimer - If your image or content was used and you want it removed just contact us and we gladly will. Images used are youtube screen captures or via getty or google images.